Review: The Girl Who Remembered Horses

The Girl Who Remembered Horses by
Linda Benson 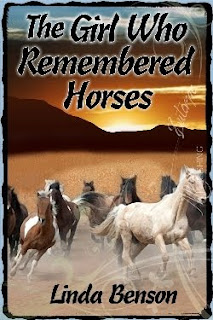 Synopsis:(goodreads)
Sahara travels with her clan in a future, barren environment where recyclables are bartered for sustenance, and few remember horses or their connection to humans. But Sahara has recurring visions of riding astride on magnificent animals that run like the wind.

With the help of Evan, a young herder from the Gardener's Camp, Sahara discovers a valuable book and learns her visions are real. But will the hot-headed hunter Dojo kill the horses before she can persuade her clan of their usefulness? Will Sahara give up her quest to save them after she is labeled a foolish dreamer?

Following horse tracks up a remote ravine, Sahara discovers a gruesome scene, as well as a helpless baby horse. Now Sahara must use her wits and inborn knowledge to raise the young animal, finally convince her clan of the ancient bond between horses and humans, and discover the secret of her true identity.

I received a copy of this book for a honest review.

Sahara and her clan live in a time after the Dark Days, where technology is no more and horses are all but forgotten. Sahara lives with her sister Laurel who is the main provider for their family after their parents died due to a flu epidemic, and their grandfather. Together they travel as a group around trying to find supplies to trade such as shoes. Sahara known as the dreamer of the family is amazing with animals and at night dreams of strange animals that run like the wind through the desert.

One night when the camp is on their way to the Gardener's Camp Sahara and her clan spot them, the beautiful beasts in her dreams; horses. She instantly feels a kinship towards them and vows to protect them no matter the cost. This vow does not come without difficulty as Dojo the most skilled and arrogant hunter in the clan vows to catch and kill on for meat. Asking around the Gardener Camps Sahara and Dojo both go looking for answers about the strange beasts known as horses. Over time Sahara and her old friend Evan find answers about how horses and people used to work together as one. One night Sahara's chance comes and she must face her fears in order to save the giant creatures she has come to love from afar. This task and love for the beautiful creatures does not come without many costs and many times Sahara wonders what is too much to give.

Honestly, The Girl Who Remembered Horses is a great novel. Once I was able to pick it up, I could not put it down. Sahara's story is a great one and I took to liking her as a character right away. She is realistic and not without flaws. I thought this story was awe inspiring and have definitely added this book to my list of to-reads for another time. All the characters were so well written as well as the rest of the story with an amazing ending that leaves much open, but not too much! I think The Girl Who Remembered Horses is very much about how you can do anything if you believe in yourself no matter what everyone else says.
Rating: 4.5