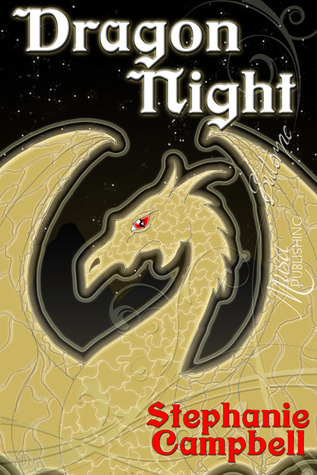 Book Info:
ebook
Published by Musa Publishing
Word Count: 75000
Author: Stephanie Campbell
The only thing more shocking than discovering that dragons really exist is finding out that you are one.

Ever since he could remember, Ford was treated cruelly by his parents, Liddy and Wicker Forks. He cannot figure out why they hate him so much. It is only when he discovers that his father isn’t really Wicker Forks but instead is a mysterious, red-eyed stranger that he goes on a quest to find his true identity—and much, much more.

As he heads forward down the path of danger and illusion, he uncovers a world that he had never imagined, a world of dragons. Ford must decide who he is—a dragon or a boy—and whichever path he chooses will be his future for forever. After all, once you are a dragon, there is no going back.
My Review:
I received a copy of Dragon Night for an honest review.
Ford Forks life has never been filled with love. He's lived his life working at his fathers' pancake house which he has dubbed the Mother Ship for it's out of this world atmosphere. He hated by his family for an unknown reason to him, his schoolmates ignore his presence, and he only has one friend.
One day during his mad dash to class he becomes incredibly ill and is sent home. Next thing he knows he's becoming sicker and sicker as time goes by. Having huge waves of pain as if he were boiling from the inside out, huge rashes, welts, and sores also begin appearing on his skin and he has no one to turn to. After a bad episode at the pancake house he is taken to the hospital and is told a truth that changes his life forever.
Oh a journey to discover the truth he discovers a world where dragons exist and he is the offspring of such union, a draconic. However, it becomes apparent to the dragon world that Ford is different. As truths are revealed, Ford must decide to help start and finish the war between the cruel dragons who have ruled over the draconic for ages, or simply walk away back to his old life.
Overall a great novel. I felt this was a novel that truly moved me. The characters were amazing and relateable, there was tons of action, and overall great writing. Dragon Night is a book for all ages. I truly enjoyed this book and I hope you all pick up your copy and read it too. Honestly I have a warm place in my heart for dragons and I loved the spin that Stephanie Campbell put on them
Rating: 4.5