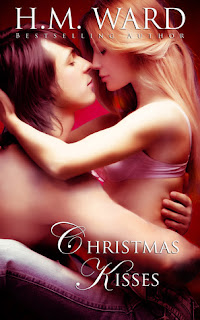 Synopsis:
How hard is it to NOT have sex with him? Lust has melted Holly Connelly’s brain and it’s all Ryan Darcy’s fault. He’s been ruthlessly flirting with her for the past three years. Ryan’s a sex god complete with sinful body, endless wit, and an orgasm-inducing smile. One sultry look from him will make her panties jump off her body. His endless string of one-night stands has Holly thinking she’ll be just another conquest. Since she actually has feelings for the guy, it makes it that much harder to put off his advances. When they get trapped together by a snowstorm, it’s all she can do to resist him. If Holly says yes, she’ll probably regret it. If she says no, she’ll always wonder what if. (goodreads)

I was extremely lucky to receive ANOTHER ARC from H.M.Ward of Christmas Kisses, hope you like the review and check out the book 8)
Holy holy wowza. I swear H.M. Ward can not write a bad novel and Christmas Kisses is no exception. I honestly think this book is my second favorite book of the year done by H.M. Ward.

Christmas Kisses is told mostly from Holly's perspectives but does switch to Ryan's sometimes which just made this book even better!!

The story starts out with Holly Connelly is worrying about seeing her three year crush who she can barely keep her hands off and hasn't stopped thinking since she left five months ago. Now back in New York City she's faced with the dilemma she tried to leave behind, Ryan Darcy. Ryan Darcy is a heart throb who is known for his one-night stands and is a love em' and leave em kind of guy. The kind of guy that Holly is trying to steer clear from because she knows that if they take their relationship to the next level it would end badly. Hoping she doesn't see him at the party is a bust and after all the time apart they are still drawn to each other.

Overall, most of this book is filled with Holly and Ryan's confusion towards each other. Both of them assuming(which everyone knows what happens when people assume things) that the other knows just how affected they are by one another. Thing is? Neither of them do. Holly thinks Ryan only wants to flirt or have a one night stand with her and Ryan thinks she'd never be interested in a guy like him. The story goes on and on as they try to conceal their feelings for one another because they both fear what will happen afterwards. The sexual tension builds and build until finally BAM!!! Hot steamy sex leaving them both breathless. Does the story stop there though? Of coarse not. For Holly will be going back to Texas to start her college coarse again soon. Staying together through the holiday's and then it's time for Holly to head back to school. Will Holly and Ryan's feelings for one another survive the distance? Or will they just share Christmas Kisses?

Favorite Quote:
"She turns to walk away, saying over her shoulder, "I'll call you later. I want to know every detail."
Ryan's face flushes as he looks at me. "You guys don't really do that, do you?"
"Do what?"
"Tell each other everything. I mean, not everything, right?" Ryan squirms in his seat for a moment.
I lean forward on my elbows. "Why would it matter? I only have good things to say about you. Good big things.""

CHRISTMAS KISSES IS ON SALE NOW AT THESE RETAILERS: