Review of Tempting The Player 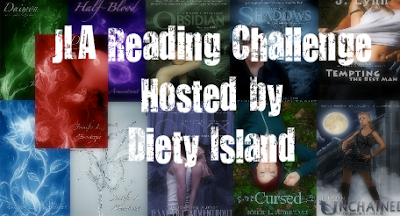 The JLA Reading Challenge hosted by Deity Island.
This months goal was to read and review Tempting the Player so here it is: 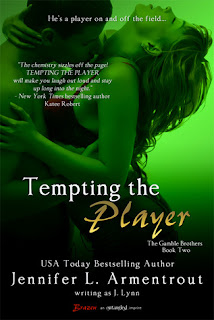 Synopsis:
Chad Gamble, all-star pitcher for the Nationals, is one of the best players on—and off—the field. And right now, the notorious bad boy wants Bridget Rodgers. But with her lush curves and snappy comebacks, the feisty redhead is the kind of woman a man wants to settle down with…and that’s the last thing Chad needs.

When the paparazzi catch them in a compromising position, Chad’s manager issues an ultimatum: clean up his act or kiss his multi-million dollar contract goodbye. To save his career, his meddling publicist says he'll have to convince everyone Bridget isn’t just his flavor of the week, but his girlfriend.

Being blackmailed into a fake relationship with Chad Gamble isn’t easy, especially when the sizzling physical attraction between them is undeniable. With a month to go on their arranged pretense, it's going to take every ounce of willpower they have not to fall into bed together...or in love.

Review:
Well to say Jen has done it again would be an understatement. Tempting the Player is an awe-inspiring, breathtaking, magnificent, mind-blowing, wondrous (I can go on and on) read. Needless to say if I have homework and Jen has come out with another book I will be happily skipping homework.

Tempting the best player is a double POV(point of view) novel.

At the beginning of the novel Chad and Bridget meet at a bar and there is instant attraction. After Chad takes Bridget home for some fun time and ends up spending the night alone when Bridget disappears. Thinking he'll never see her again he tries no no avail to forget about her. That is until he sees he again.

"And dear God, what kind of panties was she wearing tonight? The satin black ones or the granny panties? Since she hadn't seriously considered going home with someone, if they were the granny panties, she would die."

Chad...oh what can I say about Chad. Chad is a complete and total hunksicle. A complete sex God!! He's arrogant, and cocky and completely swoon worthy, which isn't surprising since Jen wrote him and all her men are swoon worthy. I have to say though, I think Chad really takes HOT to a whole new level. Chad's player lifestyle is getting him into major trouble with his team. His sexcapades are continuing to get front page news and making both him and the team look bad. Chad not wanting to settle down continues his partying lifestyle until he gets a babysitter Miss Gore who for the most part is a complete and utter Bleeeeep, well at least to Chad and one time to Bridget. Miss Gore is forcing Chad to clean up his act and even though he promises to do so, when Bridget comes back into his life, he just can't seem to help himself. Therefore leaving him in a bit of trouble and having to some how convince everyone including Bridget that she's his girlfriend. As they continue to spend time together the attraction level goes through the roof.

Alright lets' talk about the extremely hot and steamy moments now shall we? Seriously I honestly felt my heart racing during some of these delicious parts in the book. Other times I was like "holy..." and fanning myself, seriously HOT burning moments. Lots and lots of foreplay and sexual tension.

I loved how Chads personality was different from Chase's even though they were brothers. Not saying I thought Jen would make them super close personality wise I just thought it was cool how totally different they are from each other.

Definite favorite scene was either the restaurant scene where Chad sees Bridget again, or Christmas....Christmas was awesome....anyway, you NEED to pick up a copy of this book ASAP!!! It'll keep your swooning and laughing until the very last page, and maybe even a little while after.