The Chupacabra Review and Blog Tour 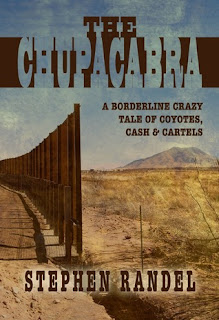 The Chupacabra: A Borderline Crazy Tale of Coyotes, Cash & Cartels
By Stephen Randel
233 pages
Publisher: Knuckleball Press
August 19, 2012
Genre: Dark Comedy
Amazon link:
http://www.amazon.com/The-Chupacabra-Borderline-Coyotes-ebook/dp/B009068D40/ref=tmm_kin_title_0?ie=UTF8&qid=1345579141&sr=8-1
Synopsis:
He is called El Barerquo. He makes his trade along the border, smuggling guns and killing without remorse. As he faces his one last mission, his perfect plan is unwittingly foiled by Avery, a paranoid loner obsessed with global conspiracy theories who spends most of his time crafting absurd and threatening letters to anyone who offends him. That means pretty much everyone.

What unfolds is a laugh out loud dark comedy of madcap adventure stretching from Austin to the West Texas border featuring a lunatic band of civilian border militia, a group of bingo-crazed elderly ladies (one packing a pistol nearly as long as her arm), a murderous and double-crossing cartel boss, a burned-out hippy, and a crotchety retired doctor and his pugnacious French bulldog. Read it to believe it.

Bio:
Stephen Randel, CFA, was born in Houston, Texas. He is a graduate of Texas
Christian University. Steve now lives in Minneapolis, Minnesota with his wife and
their two rescue dogs.
Review:
I received The Chupacabra in exchange for an honest review.

The Chupacabra is honestly the most diverse reads I've ever had. The word talks about the border control problems with gun and drug cartels, as well as murders along the United States, and Mexican border. There is evil working both sides of the border. The main antagonist; El Barerquo "The ferryman." He kills without hesitation. Is cunning, and is working the system to try and start an all out war between some of the biggest drug and arm smugglers in Mexico in his quest to gain money. There is a lot of violence especially where El Barequo is involved. He is either the cause of or near the area when violence is taken place.

I honestly have to say Avery was one of the funniest characters to read about. He definitely has an insanely interesting and definitely a sugar crazed narcissist. Most of his personality was brought about in e-mails he wrote to every corporation he felt had wronged him in some way. He finds himself incredibly self important and is socially inept.

Avery and the church going bingo women are easily the most hilarious in the novel. Especially Mrs. Pearl, she honestly cracked me up every time she opened her mouth. Oh and the French Bull dog Maximilian, he was extremely entertaining to read as well.

There are many more perspectives and stories told in this novel, and each of their stories is brought into the grander story in some form or fashion. I thought it was impeccable writing, and I hope you all pick up your copy of The Chupacabra ASAP!!!! It's an amazing read, with amazing writing and I hope there is more to come from Stephen Randel.