Ephemeral (The Countenance) by Addison Moore 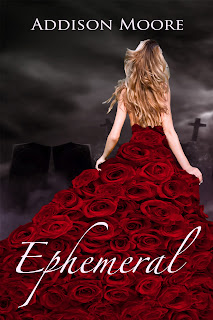 The last thing Laken Stewart remembers is the oncoming car, then bursting through the windshield.

Two months dissolve without her knowledge and she finds herself in unfamiliar surroundings with strangers who not only profess to know her but insist she’s someone else entirely.

Laken discovers her long dead boyfriend, Wesley, has been thrown into this alternate world as well. He is quick to inform her she suffered a horrible fall and that her memory hasn’t fully returned. According to Wesley the other life she had—her name, her family, they were simply a side effect of her brain trauma.

In her quest for answers she meets Cooper Flanders, the son of her psychiatrist who readily believes every word she says.

Laken Stewart knows she died on that hot July afternoon, but now she’s alive—or is she? (goodreads)
Review:
The beginning of this story starts off fast pace and the way it's written is so the reader is just as confused as the main character Laken. Laken finds herself floating towards a light and then suddenly she's on the damp ground in the middle of the woods at night. Then the creatures come and she's running for her life and into a complete hottie, Coooper Flanders, who saves her life and then disappears into the night.
After making her way out of the woods she finds herself faced in a world where everyone knows her and she knows well no one. She thinks she's going crazy until her roommate tells her that she remembers her life before, and that Laken better play along with "their" rules or she'd disappear as so many others have. Thinking she's going insane she sees two familiar faces; her dead brother and dead boyfriend. Thinking she's landed in heaven her dreams of seeing Wesley makes her think everything will be okay, but it's not that simple.

I have to say Ephemeral was extremely different from anything I've read before. It's YA/ Mature, which I've never heard of before so that was extremely exciting to find out about that. I can definitely tell the difference. Laken is an extremely likeable character, she sticks up for what she believes in, and she is definitely intuitive. She catches on quick that something isn't right and she wants to find out what and how to get back to her own world, no matter the cost. She is also um...well horny a lot in this book while around the two love interests. Laken is also a very witty character so I think that spiced up the book some. Ephemeral is filled with a lot of action, and dark secrets, as well as things that go bump in the night. At some points the terms were a tad confusing but I got the basic concept.

Needless to say I think you should definitely pick up a copy of Ephemeral  at : Amazon.com if you haven't already and I think you will like it a lot. It's definitely a quick read, I finished it in one sitting. This is my first book by Addison Moore, but definitely not my last. If you follow the link you can find out more about her and her amazing books.
I absolutely am in love with the cover. It's so beautiful and I think goes with the book extremely well.