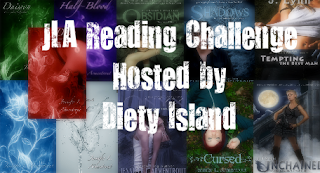 The JLA Reading Challenge hosted by Deity Island is still going strong until August 31st so since I am starting school I figured I had better get going. 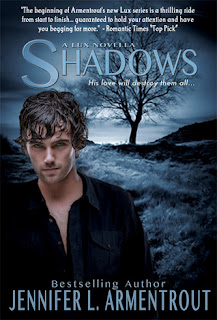 Synopsis:
The last thing Dawson Black expected was Bethany Williams. As a Luxen, an alien life form on Earth, human girls are…well, fun. But since the Luxen have to keep their true identities a secret, falling for one would be insane.

Bethany can’t deny the immediate connection between her and Dawson. And even though boys aren’t a complication she wants, she can’t stay away from him. Still, whenever they lock eyes, she’s drawn in.

Dawson is keeping a secret that will change her existence...and put her life in jeopardy. But even he can’t stop risking everything for one human girl. Or from a fate that is as unavoidable as love itself.
Review:
I seriously started crying at the end, even though I totally knew what was going to happen I was still so sad. Thank goodness no one was around or that would have been embarrassing.
I love what Dawsons' back story gave  to the Lux series, because it helped with other parts of the story, like why Deamon is such a bootie hole, and why he's so protective.
I still despise Andrew though, he's such a dirty rug muffin.
I also liked that Adam talked in this one cuz he didn't do much of that in Obsidian.
Dawson was all kinds of alien hotness, I can see that even though Dawson and Daemon look the same, they have very different personalities.
I really liked Bethany too. She's some what similar to Katy where they both have passions for things. I love how even though Bethany falls head over heals for Dawson she still remains an awesome character and not like drooling over herself until she sees Dawson again. Which is another reason all of Jennifer L.'s female characters rock.
Ugh, I hate waiting to see what happens, but I think this series is worth it. 8)

Favorite Quote:
""A spork," Dee said, grabbing her bag. "What is a spork?"
Bethany's mouth dropped open. "You've never seen one?"
"Dee doesn't get out much," Dawson replied grinning.
"Shut up." Dee pulled out the fork and spoon in one and smiled. "I've never seen one of these! Ha. This is so handy." She looked over at Daemon eyes dancing. "We could get rid of half of our silverware and get like ten of these and we'd be set for life.""
Rating: 5/5
Onyx(Lux #2) 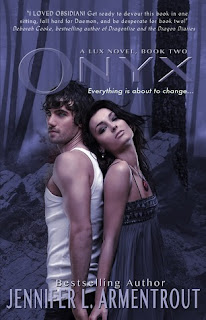 Thanks to his alien mojo, Daemon’s determined to prove what he feels for me is more than a product of our bizarro connection. So I’ve sworn him off, even though he’s running more hot than cold these days. But we’ve got bigger problems.

Something worse than the Arum has come to town…

The Department of Defense are here. If they ever find out what Daemon can do and that we're linked, I’m a goner. So is he. And there's this new boy in school who’s got a secret of his own. He knows what’s happened to me and he can help, but to do so, I have to lie to Daemon and stay away from him. Like that's possible. Against all common sense, I'm falling for Daemon. Hard.

But then everything changes…

I’ve seen someone who shouldn’t be alive. And I have to tell Daemon, even though I know he’s never going to stop searching until he gets the truth. What happened to his brother? Who betrayed him? And what does the DOD want from them—from me?

No one is who they seem. And not everyone will survive the lies…

Review:
AH!! So in love with this freaking book it's not even funny. Where to begin...

Onyx contains waaay more Daemon than Obsidian, which  was awesome. Onyx is full of major surprises, that I was not expecting at all. This book honestly made me love this series even more, and left me wanting even more. The ending is complete torture, I sat there after I finished and just stared at it going, "WHAT THE BLEEP!?!?! OH MY GOD THAT CAN NOT BE IT!?!?!

Oh oh and there's toe socks or as Daemon calls them mittens for your feet. Have to say I was super excited that those were in there, my boyfriend kept insisting I was the only dork in the world that wore those. So there, imaginary book people wear them too!!!

Katy is still honestly one of my most favorite and idolized female heroine characters ever. She spends a lot of this book thinking about how she feels, and goes through some major changes. So she is also reaching some awesomeness.

Daemon was even sexier in this book. While he still had his great moments of dickdom, for the most part he the sweet, caring, awesomesauce Daemon that Katy likes so much. He also kicks some major ars in this book. Seriously, his awesomeness was completely kick waay up in this book.

There is a new guy in this book. I won't give too much away by talking about him, but he's super cute.

Sadly Dee wasn't in this book as much, but my favorite scene was when she lit her boobs on fire. Which I swear I was laughing so hard at that part I started crying.

Favorite Quote: This quote was insanely difficult to pick. I settled with this one since I couldn't put ALL of them on here. Plus this one remind me of when I get pie.
""How big of a piece of cake do you want?" I pulled the cake out of the freezer.
"How big of a piece are you willing to part with?"
"As big as you want." I grabbed a knife out of the drawer and sized up what I thought was a suitable piece for him.
"Bigger." He hovered over my shoulder.
I moved the knife to the side.
"Even bigger."
I rolled my eyes and moved it a couple inches.
"Perfect""
Rating: 5/5
Posted by Reese's Reviews at 10:53 AM