Review of Assassin: Fall of the Golden Valefar (Demon Kissed #6)

Review of: Assassin: Fall of the Golden Valefar (Demon Kissed #6) 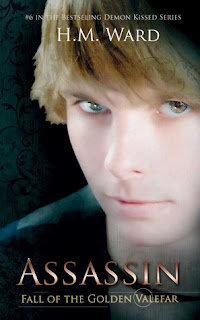 Synopsis:
There is neither pure goodness nor pure evil in your heart—you are what you choose to be.
Those are the words Ivy spoke to him three years ago when she sent Eric to the surface. But she had no way to know that every day the curse would twist his mind further, making Eric more depraved and more desperate to stop the monster he is becoming. Eric puts a lethal plan into action. Once started, it cannot be stopped. The plan will result in his ultimately finding peace—and destruction.
However, Natalia has other plans. She's spent three years getting close to Eric and doesn't plan on letting him slip between her fingers. But when she finds the opportunity to destroy him, she hesitates--seeing the spark of goodness he still possesses.

Review:
This book was beyond perfection. I loved how every time a new character would come in, their perspectives were given along side the other persons perspectives. So awesome. The main characters switched from the first five books in the series, if you couldn't guess. Ivy did make a wonderful appearance during the book though which was super exciting, cuz I love Ivy.
Characters:
Story Line:
Assassin: Fall of the Golden Valefar is honestly full of so many twists and turns that surprises that at the end I was completely surprised, which is amazing. The story often switched between Eric and Natalia which was awesome, because you get more of the story. This story was a lot more adult than the first five which was awesome. And a total "duh" since it's Eric, who changed majorly even from the The Thirteenth Prophecy. Now he's not completely evil so you can sympathize with him.


Now the story does leave off with a cliff hanger so that means...there will be another book!!! Super awesome right? I would highly recommend reading the other five books before you read this book. Coming into a series on the sixth book is kinda hard so I would go pick up Demon Kissed if you haven't already.