Music Monday
Okay so I was thinking about this posting last night and I was like what am I going to do. So I came up with Music Monday. I don't know if anyone else is doing this, but if they are I give them full credit. Anyway, I'm going to list a couple of books and a song that reminds me of them. The books I'm going to cover are in a series and I swear after reading both of them I was like oh my lanta these books remind me of this song.
Under My Skin and Second Skin by Judith Graves are two books I saw on my recommendations list on goodreads and after just finishing Taken By Storm by Jennifer Lynn Barnes I was still in the werewolfy mood. The song that reminds me of this series is:
She Wolf by Shakira 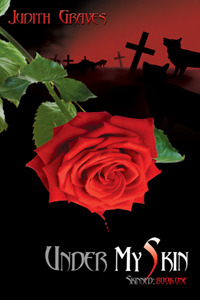 Redgrave had its share of monsters before Eryn moved to town. The Delacroix family is taking the blame, but Eryn knows the truth. Something stalks the night. The Delacroix are dangerous, but then so is Eryn--in fact, she's lethal. 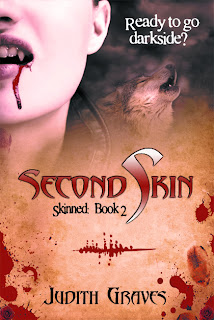 Sequel to Under My Skin.

Monsters. Bloodsuckers. The evil. The damned. Eryn McCain knows they exist— she’s been hunting them since she was a child. At sixteen, she’s ready to take on all comers. Being a shapeshifter gives her an advantage when it comes to her unusual part-time job. The hours suck and the pay is, well, non-existent, but bonuses like inhuman strength and night vision make tracking scary beasties a dream come true. Especially in a town like Redgrave.

When an ancient demon targets Redgrave High, Eryn and her crew of hunters must face their innermost fears to prevent the Harvest Moon Dance from becoming one serious Monster Mash. Loyalties are tested and temptations abound. With questions ever brewing, can Eryn share a future with the brooding, noble, human Alec—the hunter after her heart? Or will she succumb to her enemy’s son, Wade, a seductive predator as bloodthirsty as she is?

What happens when you’re both the beauty and the beast?

Review:
After I read these two books I had no idea what to think. Throughout the entire first book you pretty much know only about three main characters are supernaturals. At the end more characters have reveled themselves and I swear I never saw it coming. The main characters spends most of the entire first book fighting both sides of herself. She's a half wolven which is just a different more modern day werewolf. Kinda like Underworlds werewolves. They can change into humans, and have thoughts. Werewolves on the other hand can't change back into humans and have little to no humanity left in them. So Eryn throughout most of the series is trying to figure out what to do with herself. It's more or less extremely annoying.  Everyone is super secretive, even though they say they're friends which like I said annoying. Nobody trusts each other, and it's just dumb. The humor in this story is probably the only aspect that kept me reading. The song She Wolf reminds me of these two books is because, Eryn is trying to keep her wolven half trapped inside of her, and hidden from the entire world. Even herself. Even when she feels the pull of the moon, and uses her wolven super powers she still acts like it doesn't happen. The part of the song that reminds me of that is "There's a She Wolf in your closet, let it out so it can breathe." Seriously if she would just stop suffocating her wolven half throughout the entire series most of the problems in the book, wouldn't have happened.
Rated: 3/5

Also, there will be a third book called Skin of my Teeth. Expected released date 2013 sometime.
Posted by Reese's Reviews at 11:25 AM