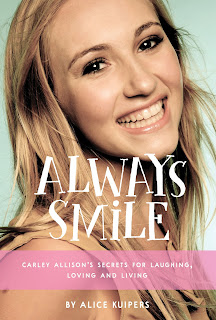 Title: ALWAYS SMILE: Carley Allison's Secrets for Laughing, Loving and Living
Author: Alice Kuipers
Pub. Date: May 7, 2019
Publisher: Kids Can Press
Formats: Hardcover, eBook
Pages: 392
Find it: Goodreads, Amazon, Kindle, B&N, TBDNot long ago, seventeen-year-old Carley Allison had it all. She was on the edge of fame as a singer and composer. She was reaching for the highest levels as a competitive skater. She had a brand-new boyfriend and a golden future waiting after graduation. Her world came crashing down when she was diagnosed with a rare kind of cancer in her throat. Her case, doctors said, was one in 3.5 billion. Faced with an uncertain new future, Carley did what she always did: she rose to the challenge. Cancer treatment tested her, but Carley was fearless and strong. Told she might never sing again, Carley beat the odds and performed on television for an audience of millions. "Ladies and gentlemen," the announcer said, introducing her, ?"he voice you're about to hear is a miracle ..." Carley died before her twenty-first birthday, but her memory lives on in the countless people she touched with her courage.

Author Alice Kuipers weaves their stories with the blog Carley kept in the final months of her life. These many voices --- plus plenty of Carley's texts and photos --- show her transformation from ordinary to extraordinary, and convey her personal rules for living well in the worst of times.

Excerpt:
I’m being as brave as I can. No. Braver. I’m telling myself I’m going to be okay. But right this moment, I feel not so brave. I’m sitting outside on the low wall in my front yard. No one knows I’m here — but in a few minutes John is going to show up, and we’re going to watch a movie. Of everything that’s been happening to me, knowing I’ll be in his arms feels so good.

The air is chilled, although I feel that spring is coming. In the dark I can make out small buds at the ends of the lower branches. And there is a smell in the air — it’s not a gloomy dark, filled with damp and swirling winds, like in the fall. It’s a safer darkness, a darkness that promises good things, a dark- ness that holds me close.

But even in the embrace of the night, I feel the fear growing inside me. I’m going to lose my hair. I know it’s not a big deal in the grand scheme of things — there are awful things happening in the world all the time ... wars and mass shootings, and people with nothing, no homes, no families, and kids with cancers who are really suffering. So, I know that I shouldn’t care about my hair. But as I twirl a strand of it in my fingers and tug, I feel like something else is being taken away from me. And I can’t figure out a way to take back control — I’ve tried so hard since I first went into the hospital to take back control. I sang with my trach in — even Selena Gomez heard me! And the surgery gave me control — I was counting down the days.

But my hair. It feels like it’s being taken from me, and I can’t work out how to own this, how to stop feeling sad and sorry about it. Cancer is a bitch. I still can’t believe that’s the word — cancer. But I still don’t look up and think, I have cancer. I hardly realized at the time, but it was my dad’s fiftieth birthday when I was rushed to hospital, and we didn’t get to celebrate on the day with him. Cancer took that from us as a family. But we’re going to celebrate his next birthday. I’m going to have beaten this thing. It will be the best gift I can give him.
I rest my hands on my thighs. They are still thin, but I have gained a little weight. My hands feel solid and warm, almost like I’m holding myself up. Although really my family are holding me up — they have done so much. Riley has taken so much time off school. My mom and dad have had to take time off work, and they’ve lost so much sleep — when I think about what I’m going through, I realize it’s nothing compared to what they are going through.
The night is quiet; there is a soft breeze, a promise through the leaves. A promise of the future that’s coming. I force myself to stop thinking about my hair. I think, instead, about John — not hard to do. This cancer has taken things away from me, sure. But it has given me one thing. It has given me him.


Giveaway Details:
3 Winners will receive a finished copy of ALWAYS SMILE, US Only. 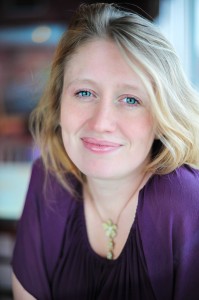 Alice Kuipers is the author of the debut novel Life on the Refrigerator Door, an award-winning Young Adult/Adult crossover published to rave reviews in 32 countries and told entirely in post-it notes written by a mother and her daughter. Named a New York Times Book for the Teen Age, Life on the Refrigerator Door has won or been short listed for numerous prizes, including the Redbridge Book Award, the Sheffield Libraries Choice Award, the Grand Prix de Viarmes, the Saskatchewan First Book Award, the Salt Lake City County Library System Reader’s Choice Award, and the Carnegie Medal.
Alice’s second novel, The Worst Thing She Ever Did (published in the US as Lost for Words), won the 2011 Arthur Ellis Award for Best Juvenile / YA Crime Book; was short listed for the White Pine Award; and was a Bank Street College of Education Best Children’s Books of the Year selection for 2011. The Worst Thing She Ever Did has been sold in 9 territories and praised as “gorgeous, heart-ripping, important” (Voices of Young Adults).
40 Things I Want To Tell You, was published in Canada by HarperCollins in 2012. The book has been praised as “funny and totally up to date” by the Canadian Review of Materials, and “crisp and effective” by the Winnipeg Free Press. Rights have been sold in Germany, Greece, Denmark and Croatia.
The Death of Us, came out in 2014 to great reviews, and was a CLA Listed Book. It’s been described as a quick and turbulent read, The Death of Us is a brilliant coming-of-age novel with a sharpened corkscrew of a twist that will leave readers breathless.
Most recently, Alice’s YA novel, Me and Me, was published in 2017. It was described by Bif Naked as mesmerising.

Alice has a brand new chapter book series with Chronicle Press starting wit the first book: Polly Diamond and the Magic Book, an Amazon best book of the month, described by Booklist as a book that: Brings the imagination to life.
Alice is also writing a memoir about teenager Carley Allison with Kids Can Press. She has had stories produced for CBC and essays published in Bristol Review of Books and Easy Living magazine. She has blogged for Today’s Parent, and The Huffington Post.
Alice’s has two picture books with Little Brown Books for Young Readers, Violet and Victor write the Best-Ever Bookworm Book, and Violet and Victor Write the Most Fabulous Fairy Tale.
Alice’s work is published in 34 countries.
Born and raised in London, England, Alice now lives in Saskatoon, Canada, with her partner, the writer Yann Martel, and their four young children.
Website | Twitter | Facebook | Tumblr | Goodreads | Instagram | Pinterest
Posted by Reese's Reviews at 12:00 AM