We are thrilled to be bringing you the release of CHASING VENGEANCE by New York Times bestselling author Katie Reus. CHASING VENGEANCE is the latest book in the Redemption Harbor romantic suspense series - be sure to grab your copy today! 
Wanting her means putting a target on her back…


Layla’s taste in men runs toward the epic side of awful. With one murderous ex-fiancé already behind her, she’s attempting to start over in Redemption Harbor with the help of her bestie, Nova. And wine. Lots of wine. The very thing that helps her make another epic mistake—trying to kiss Xavier, one of her newest friends. So what if he’s sexy, funny, and has completely taken over her fantasies? Relationships and Layla don’t mix. And Xavier is clearly not interested anyway.


But it’s too late to walk away…


Any good hitman has no business forging a personal life…no matter how great the temptation. And Xavier is an exceptionally good hitman, with a long list of enemies. Even if Layla could somehow look past his profession, he’d never put her in jeopardy. But everyone has their breaking point—and when Layla accepts a date with someone else, Xavier’s possessiveness is unleashed. The greater the risk, the sweeter the reward…until Xavier’s sweet Layla is used against him by someone from his past. Now he’ll do whatever it takes to protect her from the enemy hunting her from the shadows. 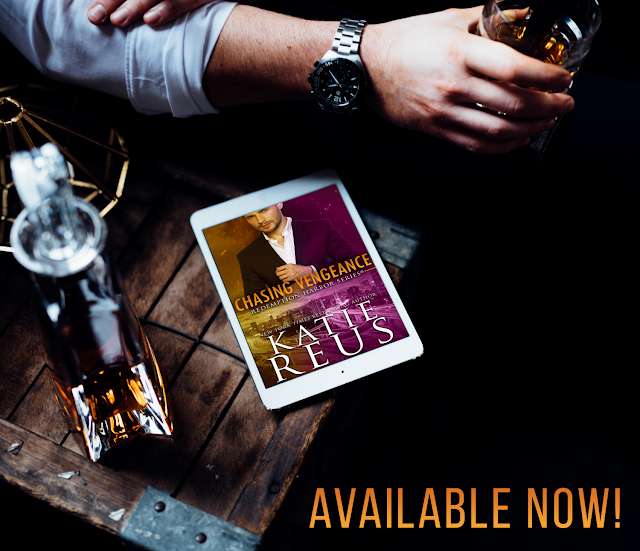 My Review
Chasing Vengeance was an interesting read. From the first few pages and the blurb, I knew I'd read similar stories, but Katie Reus made the trope feel interesting with action scenes and hidden murderers.

I'm not sure if hitman gone good is simply the new trope of the moment, but it definitely seems to have hit the ground running.

Xavier is a hitman who is also best friends with Layla. He's hidden his attraction to her for months but struggled to stay away despite his profession. Layla has had feelings for Xavier for a long time, but she doesn't trust herself due to her recent past experiences with me. After one night together Xavier determines to stay away from her until he finds out she was attacked. Now he's fulling all his resources to keep her and his family safe.

I enjoyed Chasing Vengeance. When we come into the story, Xavier is feeling tired of being a hitman and taking jobs that take him away from his family and friends. Layla is at a point where she's rebuilding her life due to her ex-fiance and she wants nothing more than stability and love that she's been denied for so long.

I enjoyed both characters and liked how I never knew what was coming next or if the danger was over or if someone was going to get injured. I think that's my favorite part about the new hitman turned good buy trope. 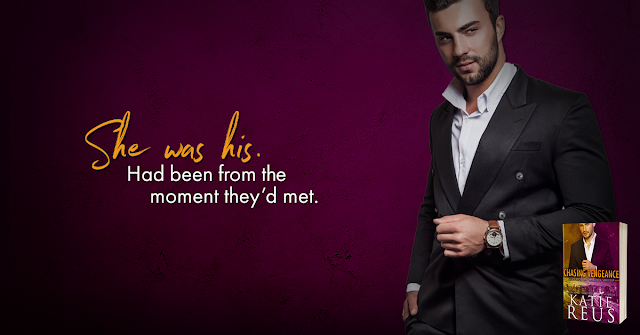 Excerpt
“Did he kiss you?” he demanded, unable to let it go.

“So what if he did? Maybe I kissed him,” she snapped. “Maybe I put on a little strip show for him to the tune of ‘American Woman’! Maybe I let him touch—”

He cut off her words as he crushed his mouth to hers. Xavier didn’t want to know if she’d done anything with her date. He didn’t care. Okay, he fucking cared , but if she’d done anything with that guy, it didn’t matter. The only thing that mattered was completely possessing her right now and wiping the memory of any other man from her mind forever.

She moaned into his mouth, her fingers digging into his shoulders as she jumped up, wrapping her legs around him. The way she clung to him surprised the hell out of him. She should probably call him out for being a jackass and showing up at her place at midnight.

His erection was hard between his legs, pressing against his abdomen, pulsing with need. She had to feel his reaction to her—and this was all for her. His entire body thrummed with energy, with the desire to thrust deep inside her over and over.

They needed to get to a flat surface. He desperately needed to taste all of her. To hear her moans of pleasure as she came against his mouth.

Xavier felt possessed with the need to have Layla even as he told himself this was insane. But as his tongue teased against hers, all common sense scattered like grains of sand at the beach. There was nothing else in the world but him and Layla. Nothing but right now.

And he needed to see her naked. Needed to taste her everywhere. Earlier tonight, in that dress, she’d looked incredible. Mouthwatering. And he’d wanted nothing more than to strip it from her body, to kiss and tease every inch of her. Now he was going to get the chance to imprint himself on her forever.

“Clothes off,” he rasped out as he pulled back from her mouth, his breathing harsh.

She blinked at him, her expression as dazed as he felt. “What?” she whispered.

“I want to see you naked. Now.” His voice sounded guttural, uneven. His words weren’t even particularly dirty, but her cheeks heated up. Oh hell. He’d misread things. They needed to slow down now. “This is too fast—”

“No, I want this. I’m just…wrapping my head around this. Us.”

That was all he needed to hear. He grasped the hem of her shirt and tugged it over her head. He hadn’t come here for this. He’d come here to warn her away from that guy, but… Hell, maybe he had come here for exactly this. He couldn’t lie to himself. He needed her like he needed his next breath.