From New York Times best-selling author Denise Swanson comes DANGEROUSLY DELICIOUS and here’s your First Look! Join us for a first peek at this sweet and sexy romance. Don’t miss the excerpt and enter to win a signed set of Delicious Love books and nine will win eARCS of DANGEROUSLY DELICIOUS 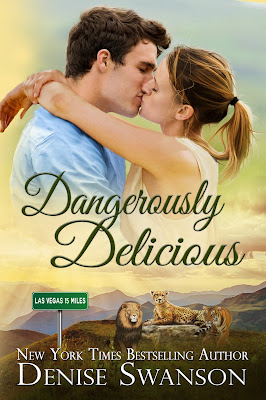 Synopsis:
Marco Thorne was hired by Club Wilde’s owner to open up the newest, most outrageous venue yet. He is absolutely certain that he can handle all the competition Las Vegas has to offer until his overbearing boss contracts with Lions and Tigers and More sanctuary to have live exotic animals present in the jungle-themed club. Still, he has no choice but to go along with his boss’s idiotic scheme, even if he thinks it’s the worst idea he’s ever heard.

Dr. Sage DeSantis’s entire life is devoted to keeping the animals under her care in the sanctuary healthy and happy. After the sanctuary’s owner announces that he’s renting out some of Sage’s babies to Club Wilde, she’s sickened that they will once again be exploited.

When Marco and Sage meet, the chemistry between them nearly knocks them off their feet. Although they both have experiences in their past that make them leery of love, and Sage is determined to guard her heart, Marco is all in. But will Marco be able to convince Sage to give them a chance?


“Marco Thorne?” The words came out breathy and Sage filled her lungs. Finally, she exhaled and asked, “Are you Nico’s brother?”

“Yes, I am.” Marco’s tone was suddenly guarded. “Do you know my brother?”

“Only through his wife.” Sage realized that Marco’s hand was still extended and she hastily shook it. “Deanna is my best friend.”

“You’re Sage?” Marco asked. “I don’t think I ever heard your last name.”

Maybe this wouldn’t be as bad as she feared. Surely, Nico’s brother would be reasonable. Maybe she could even convince him that having wild animals in a crowded nightclub was a bad idea.

Marco slowly released her fingers and they stood staring at each other. Sage wasn’t sure how long they stood there before Marco cleared his throat.

“Would you like a drink before we get started?” He gestured to the bamboo bar. “Water, soda, maybe something a little stronger?”

Sage’s mouth was dry—probably from hanging open as she gazed at the Greek god in front of her—and she said, “I’ll take a Diet Coke if you have it.”

“Coming right up.” Marco walked over, stepped behind the bar, and grabbed a glass. After filling it with ice, he held it under the dispenser. “So how long have you and Deanna been friends?”

“Since our freshman year in college.” Sage nodded her thanks when he leaned over the bar and handed her the soda. Did you attend their wedding? I couldn’t believe they couldn’t wait a couple of days for me to fly from here to Chicago.”

“Yeah.” Marco grabbed a bottle of water for himself and twisted off the cap. “There wasn’t much to see. They stood in front of the judge, he said a few words, and that was it.” Marco lifted the Dasani to his mouth. “There wasn’t any of the usual shit. Definitely not worth the airfare.”

“I’m an only child.” Sage stared into her glass of soda. “So it would have been nice to see my best friend get her happily ever after.”

“My mother has been planning a huge surprise reception with all the trimmings for their one-year anniversary. Now that the happy couple is spending a month here instead of just a week, Mom is moving the reception to the big LV. ” Marco moved closer to Sage. “I’ll make sure that you’re there for that.”

“Good.” He brushed his thumb along her jaw. “That’s good.”

Sage shivered. Something swirled around her and it felt like the air after a lightning storm—fresh, but with a hint of lingering danger. Her heart thudded against her chest, tension winding tighter and tighter as Marco’s thumb seemed to brand her skin. Her girly bits stirred in response and hormones she thought were in deep hibernation had her body going places that terrified her.

Her reaction to his barely there caress must have shown on her face, because a flagrantly sexy, oh-so-smug expression gleamed hungrily in Marco’s molten gold eyes. He put his water bottle down on the bar and brought his other hand up to cup her cheek.

His lips hovered a millimeter above hers and Sage couldn’t believe she wanted him to close the gap. They’d only known each other for about ten minutes. There was no way she should be thinking about kissing him. 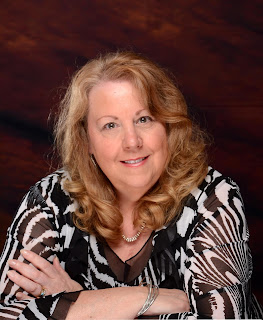 About Denise Swanson:
New York Times Bestseller author Denise Swanson was a practicing psychologist for twenty-two years. She writes the Delicious Love and Change of Heart contemporary romance series, as well as the Scumble River, Devereaux’s Dime Store, and Chief-to-Go mysteries. Her books all feature small-town heroines with lots of heart.

Denise’s books have been finalists for the Agatha, Mary Higgins Clark, RT Magazine's Career Achievement, and Daphne du Maurier Awards. She has won the Reviewers Choice Award and was a BookSense 76 Top Pick.