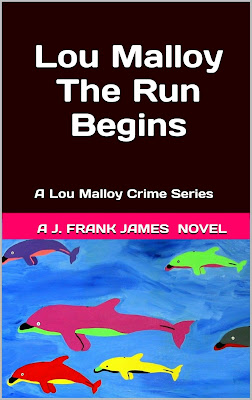 J. Frank James is the author of The Lou Malloy Crime Series, which is expected to span 20 books. The series follows Lou Malloy, a hardened criminal who did 15 years in prison for the theft of $15 million, and his partner Hilary Kelly, a private investigator.


Lou Malloy: The Run Begins is the prequel to The Lou Malloy Crime Series.

In this peek into the past, Lou Malloy is 18 years old and ready to take on the world. While his family is readying themselves for a big move to Florida, Lou decides that Florida is not where his fate lies and hops on the nearest boxcar to seek his fortune elsewhere.  When he finds that this is not as easy as it seems, fellow traveler Henry Lowe offers him the deal of a lifetime.  Help him rob a casino in Georgia and get a payoff of $15 million.  Lou happily joins in on the scheme and seals his fate.


"Dead Money Run is a hard-boiled thriller. It is a book of short chapters and almost unrelenting excitement as Lou and Hillary Kelly avoid cops, kill mobsters, and try to unravel the mystery of who killed Lou's sister and why.” - Reviewed by Wally Wood at BookPleasures.com


“Fans of James Ellroy and Elmore Leonard are going to love James’ ingenious capers, devious characters and wry humor. The entire book goes down like a strong yet smooth shot of bourbon.” - Reviewed by BestThrillers.com


"Dead Money Run by J. Frank James is a pure adrenalin rush from the very beginning. Yes, it is very violent with some strong language, but filled with excitement that keeps the reader wanting to know what comes next." - Reviewed by Paul Johnson for Readers' Favorite


“J. Frank James did a very nice job constructing a fast moving plot for Dead Money Run. It is intriguing and thrilling. However, the reader should be prepared for a bit of gruesome violence. Yet, the violence doesn’t override the mystery and suspense within the story. Hold on to whatever it is that you’re sitting on as you read this story, because James is about to take you on a wild ride.” – Reviewed by Red City Review

About the Author:
J. Frank James has a passion for writing, and he certainly has the knowledge and experience to write realistic crime thrillers, thanks to his extensive background in law. Jim attended law school, where he was a member of the law review. He even went on to pass the state bar and started his own law practice that specialized in complex litigation. Jim's experience in law helps lend credibility to his crime fiction books. He has also traveled extensively and gains inspiration for his crime thrillers from his travels. From observing other cultures and gaining new experiences, Jim is able to infuse new life into his books and develop believable characters that readers can identify with.


J. Frank James writes crime thriller novels that are gripping and suspenseful. In 2013, he began publishing The Lou Malloy Crime Series, which is expected to span 20 books. The series follows Lou Malloy, a hardened criminal who did 15 years in prison for the theft of $15 million, and his partner Hilary Kelly, a private investigator. The titles include The Run Begins, Dead Money Run, Only Two Cats, Blue Cat in Paradise, Rainbow Games, Two Birds To Kill, Last Flamingo, and Finders, Keepers.  J. Frank James creates all of his own book covers. To learn more, go to http://www.jfrankjamesbooks.com/