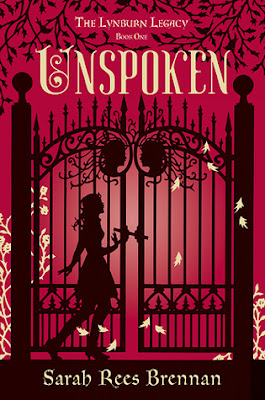 Blurb:
Kami Glass loves someone she’s never met . . . a boy she’s talked to in her head ever since she was born. She wasn’t silent about her imaginary friend during her childhood, and is thus a bit of an outsider in her sleepy English town of Sorry-in-the-Vale. Still, Kami hasn’t suffered too much from not fitting in. She has a best friend, runs the school newspaper, and is only occasionally caught talking to herself. Her life is in order, just the way she likes it, despite the voice in her head.

But all that changes when the Lynburns return.

The Lynburn family has owned the spectacular and sinister manor that overlooks Sorry-in-the-Vale for centuries. The mysterious twin sisters who abandoned their ancestral home a generation ago are back, along with their teenage sons, Jared and Ash, one of whom is eerily familiar to Kami. Kami is not one to shy away from the unknown—in fact, she’s determined to find answers for all the questions Sorry-in-the-Vale is suddenly posing. Who is responsible for the bloody deeds in the depths of the woods? What is her own mother hiding? And now that her imaginary friend has become a real boy, does she still love him? Does she hate him? Can she trust him?


Reese's Review:
Superb in many ways.

I know I don’t say this a lot on here, mostly because Sarah Rees Brennan doesn’t have books coming out all the time, but I am a Mega Fan of Sarah Rees Brennan since I read The Demon’s Lexicon Trilogy a while ago. Anyway, back in 2012 she released Unspoken and I grabbed it up so quick you wouldn’t believe it. However, I didn’t end up reading this book right away due to me being in college and at the time I was in this phase where I wanted all the books to be released first. Then all the books were released and I STILL hadn’t read this book. So now three years later I have gotten to reading this book.

Unspoken is a story about Kami and Jared. Kami lives in a small town where nothing happens until The Lynburn’s move back into town. The stories say they owned the town and everyone in it. They’re cruel, aloof, and terrifying to everyone but Kami. Kami has a voice in her head, has had one for years and when she comes face-to-face with Jared Lynburn her whole life comes crashing around her. She never thought she’d meet Jared the voice in her head. She never believed in Magic, but as people start dying and disappearing Kami wants to get to the bottom of what’s happening to her town, and what happened to her family.

Kami is eccentric in a lot of ways. She has a voice in her head whom she considers her best friend. She wants to be an investigative reporter, which leads her to the Lynburns. When she meets Jared they immediately dislike each other, which was super surprising to me. I didn’t expect them to not fall immediately in love, but I should have known better. SRB has a way or torturing us. Kami likes Jared a lot even though he’s a tool bag to her, but when she meets him she begins not trusting her feelings towards him and thinks it’s just the magic and not the real him she likes.

Jared is a world-class ass. I mean for real he is a douche. Do I like him? Hell yeah he’s hilarious but seriously douche-y. Anyway he and Kami don’t hit it off; he won’t touch her and constantly is saving her life. He’s always doing evil things like ruining her dates with his cousin with evil childhood stories. I loved every second of it, even when I felt like hitting him.

The humor from these characters and amazing story telling are what had me really enjoying this book from beginning to end. There is so much mystery surrounding everything I simply must know what will happen next.

The one negative I have about this book it that it kind of dragged on. I enjoyed the story but some parks dragged even during the action-y scenes.

Overall Unspoken is a fun hilarious read. If you haven’t read the wonders of SRB you simply must check her out sometime, and why not with this book? Mysteries around every corner and characters that seem so real and funny you’ll want to meet them in real life.

example, example, example
Sarah Rees Brennan is Irish and currently lives in Dublin. For a short stint, she lived in New York and became involved with a wide circle of writers who encouraged and supported her, including Holly Black and Cassandra Clare. She has developed a wide audience through her popular blog, mistful.livejournal.com, where she writes movie parodies, book reviews and some stories.