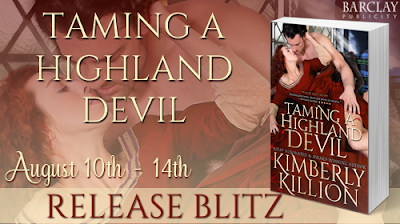 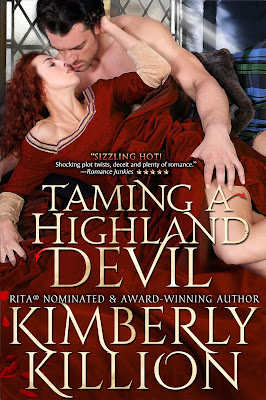 Synopsis:
A CHOICE... Laird Magnus Sutherland loves women. His prowess in the bedchamber has earned him the name Devil of Dunrobin, but no woman has ever stirred his heart. Magnus needs to provide his clan with an heir, which is the only reason he agrees to marry the neighboring chieftain’s sister. When his betrothed arrives, he discovers the chieftain has two sisters. If Magnus must bind himself to one woman, he intends to discover which is best suited to be his wife, for he wants more than a body to plant his seed. He wants a mate for life.
A CHALLENGE... There are three reasons Lady Effie Reay refuses to vie for Laird Sutherland’s affections… For one, she is thirty-two and would surely lose a competition to her beautiful, younger sister. Secondly, Laird Sutherland is a well-reputed rake, and she holds no desire to wed another faithless man. And thirdly, the sight of him makes her tingle, shiver and ache. Will Effie be successful in thwarting Magnus’ advances, or will her body succumb to a temptation that can only lead to heartbreak?

Get More information at: Goodreads  | Amazon


Reese's Review:
Laird Magnus Sutherland is a ladies man. He loves pleasuring women and his a bit of a reputation for being a loose with the ladies. After signing an agreement with another clan to marry the chief’s sister he knows he’s going to need to settle down so he can produce an heir. The problem is he doesn’t want the sister he was promised he wants the older sister Effie. Effie doesn’t want anything to do with Magnus because she knows he’s supposed to be with her sister. However, when she finds out her sister has been unfaithful she starts vying for Magnus’ attention. The couple is really cute together and while they have some issues here and there with family they ultimately have a happy ending.

Magnus is a man wh*re. There isn’t any and, if’s or buts about it. He enjoys woman and while I liked his character, I think because the book is so short I couldn’t fully believe in his turn around behavior about wanting a solid relationship with his wife. He’s basically slept with any female that moved and then the book kind of expects us to believe that he will be faithful because of love? Yeah isn’t that what all the cheaters say to their significant other? Like I said I enjoyed his character, but the story needed more.

Effie is a great strong woman who has lost a lot and has tried to always do what’s best for her clan and her family. I really enjoyed her character because I felt she held all the qualities of a strong female lead I love. Flawed yet strong and willing to admit to her own imperfections and someone who doesn’t take crap from anyone. Effie is fabulous.

All in all, the story Taming the Highland Devil was enjoyable and a quick read. I wish their had been more to the story for more character development and to see what happened since the story kind of left things open. 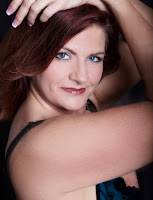 About Kimberly Killion:
Internationally published author, Kimberly Killion, writes sexy historical romances. Her debut book was nominated for the romance-publishing industry's highest award of distinction, the RITA® Award.
BEYOND WRITING CREDENTIALS, Kimberly is also the Owner/Creative Director/Photographer of The Killion Group, the umbrella company over Hot Damn Designs. With 24+ years of experience in marketing, communications and design, Kimberly holds a Bachelor of Fine Arts, a Certificate in Web Design, and is an Adobe Certified Expert. The Killion Group has designed 5,000+ book covers and has 2,000+ clients, including Kensington Publishing, Amazon Publishing, Sourcebooks, Samhain, Trident Media Agency, Kristen Nelson Agency…and many, many more.
Connect with Kimberly at: Website | Facebook | Twitter | GoodReads |Amazon
Posted by Reese's Reviews at 1:00 AM