Tour for RISK IT by Jennifer Chance 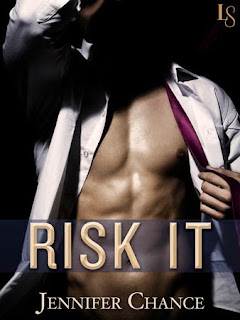 Blurb
Jennifer Chance’s Rule Breakers series turns up the heat as a wealthy playboy and a beautiful con artist engage in a high-stakes game of seduction.

As dominating in business as he is in bed, Rand Sterling Winston IV always gets what he wants. And even before he realizes that she’s scammed him into paying triple the cost for her friend’s painting, he wants Dani Michaels. To catch her alone, Rand demands that she personally deliver his purchase. The attraction between them is immediate and electric, and he knows she feels it, too. So when the part-time petty thief rebuffs his advances, he gives her a choice: a night in jail or an evening with him.


Despite her checkered past, Dani has never met someone like Rand: brooding, intense, and oh so tempting. Only a man with a broken soul could make control feel this dangerous. Still, when Rand proposes a no-strings, no-holds-barred affair, Dani’s more than a little intrigued. It’ll be the trickiest con she’s ever run and a chance to indulge her steamiest fantasies—nothing more. But as their encounters grow increasingly intimate, Dani uncovers a vulnerable side to Rand’s steely exterior and opens her heart to the ultimate risk.
Follow Tour
Goodreads | Goodreads Series
Buy Links:   Amazon | B & N | iTunes | Kobo
Reese's Reviews:
Dani is a scam artist, a thief, a con artist. When she cons a rich businessman for paying overpriced for her best friends art she thinks that’s the end. Until he has her arrested and tells her he’ll pay her for her time for one month. Rand wants Dani since she is the ultimate challenge. Dani needs the money for her brother so she agrees but tries to keep her heart protected and Rand will do anything to break her in a month. Then they get to know each other and their relationship becomes way more complicated. Dani tries to come across as a bad mama but she is really a protective softy. She will do anything for the people she loves, which is how she ends up scamming Rand out of his money and how she ends up spending time with him. She’s really sweet and I loved her character. She grew up in foster care and has a dark past, but she doesn’t let it stop her. Rand is a complete and total douche bag. He takes an interest in Dani and wants to break her and move on. He insults her and basically uses her as his sexual plaything for a month. He tries to diminish her self-worth and dignity throughout this entire book even after he realizes he has feelings for Dani. He is a terrible book boyfriend. I have to say I’ve read Jennifer Chance’s other books in this amazing series and this one has been my least favorite. It’s still a captivating read with amazing writing, but not my favorite. The sexy scenes were off the charts, but Rand’s douchey-ness really put a damper on my liking the sexy scenes the way I usually do with Jennifer Chances books. I have to say I really enjoyed Dani and all the characters besides Rand. The story was interesting and like nothing I’ve ever read before. I really enjoyed it. Overall I may be jaded in my thinking of Rand so you may really enjoy this book and Rand. Despite my disliking Rand I really enjoyed this story with it’s fast paced writing and fantastic storytelling. It was amazing.


Excerpt 1
From the tousled curls of his jet-black hair, and his sculpted lips and cheekbones, to the drape of the One-Percenter suit beneath his gorgeous wool coat, everything about Rand Sterling Winston IV was icy perfection. Even the sidewalk salt on his shoes looked like decorator frosting. Still, Dani would bet serious money that the man’s veneer was as fake as her knockoff Blahniks, meticulously designed to hide his true colors. She didn’t know what danger lurked behind Winston’s aloof facade, but it snagged her attention, making it almost impossible for her to focus on anything else. The guy was like black ice, she decided. Cold and slick on the surface, dark and dirty underneath. The perfect kind of target for a frigid Boston night.
Glancing up from her papers, Dani looked past Winston once more to the wall of paintings beyond, completely unsurprised to feel the man’s gaze narrow on her across the room. Frauds knew when they were being checked out. So did control freaks. She amended her assessment to add that to the tally of Winston’s impressive list of qualities.
Still, that stare was her cue. Clutching her clipboard officiously, she stepped out from behind the counter to stride across the gallery floor. Just as she reached Tall, Dark, and Loaded, however, she met his gaze for half a second, then veered out of the way.
“Miss.”
He hadn’t expected to have to speak to get her attention, she knew. His beautiful face looked more surprised than it probably had at any point in the last six months. Score one for her side. “I’m sorry, sir,” Dani said. “If you’ll excuse me. I have to remove a painting.”
“Remove one?” He frowned at her, the sheer command in his voice keeping her in place as much as the subtle shift of his body. He was taller than she’d expected. At five foot ten without the stilettos, Dani wasn’t used to having anyone look down at her, and she didn’t have to feign the chilliness of her smile as Winston blocked her path, reminding her of her initial evaluation of him. Black ice could be deceptive, too, and Silver Spoon seemed a lot more treacherous up close than he had from across the room. Her pulse was thrumming now, all senses on alert.
“Yes. Now, if you’ll excuse me—”
Winston’s smile curved the edge of his mouth, his eyes predatory. “But the showing has only just started. Surely you can’t have a buyer so soon.”
Dani’s return smile was all teeth. “I apologize, but”—she waved her hand over her clipboard —“I’m afraid we do. A bid for twice this piece’s stated price has come in from one of our wealthiest patrons.” She turned and studied the painting dispassionately. “He was quite insistent that it come off the wall immediately.”
“I seriously doubt he is your wealthiest patron here tonight.” The cool, condescending voice dripped money, but it wasn’t Winston who spoke this time. Dani glanced over to his lapdog, surprised to see intelligence flicker in the woman’s jaded eyes. “Except we only stopped in because of the wind, and now we’re leaving.”
Dani lifted her own eyebrow in perfect counterpoint. “I am so relieved to hear that.”
“Why that piece?”
She turned back to her mark, who wasn’t looking at her anymore, but at the small painting on the wall. “It’s amateurish at best.”
“Raw, I believe were his words. Yes . . .” Dani returned her gaze to the wall with equal gravity. “Dark. Forbidden.” She sensed the moment when Winston’s attention slipped off the painting and rested once more on her face. She met his cold eyes without flinching, her manner still polite but firm. “Who’s to say what captures an art lover’s interest though? Now thank you, but I must—”
“Triple the price.” His voice was bored, but Dani froze. Just as her own internal script demanded, her mouth opened in a soft O before she attempted speech again.
“I’m sorry, sir?”
“Rand . . .” Ice Barbie was tugging at his arm. “We’re already late.”
But Rand ignored her. He pulled a card out of his jacket, which he flourished at Dani. When she didn’t make a move for it, he slid it onto her clipboard. Even his fingers were beautiful, she realized. Long and hard and cruel. “I’m certain I have an account with this gallery,” he said. “If not, I will by morning. I’d like to have the painting marked as sold, to me, immediately. You can keep it on the wall.”
“Ahhh, of course Mister, hmmm . . .” Dani frowned down at the card, knowing she had already won. Now she was just pushing her luck, pretending not to recognize Rand’s name when surely she would have heard of him, if she was really an employee of the gallery. At the last minute, better judgment ruled. “Oh.” She brought her gaze up quickly, letting her eyes go wide.
“Yes, ‘Oh.’” Rand’s arm candy snorted. “Now, please, Rand, can we go?”
Rand held Dani’s gaze for a long, harrowing moment, and she forced herself not to tense up. The close was by far the most difficult part of the entire scam for her, but usually that was because she had a problem with gloating. This time, however, she wasn’t feeling cocky, exactly. Rand’s eyes were dark and challenging, the fire in their mocking depths promising the kind of pleasure Dani hadn’t experienced in a long, long time. The kind of pleasure he clearly craved, the way a drowning man craved air.
The kind of pleasure he wanted to give to her.
Black ice, baby. 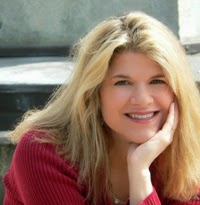