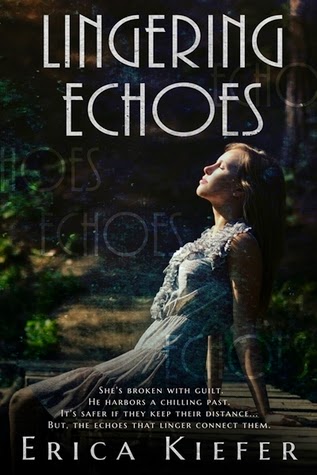 Blurb:
She's broken with guilt.
He harbors a chilling past.
It's safer if they keep their distance...
But, the echoes that linger connect them.

Returning to Hidden Pines is the last thing Allie Collins wants to do during her final summer before college. For her, the family cabin she spent her youthful summers in, now holds a dark memory that has haunted her every day for the last year.

While struggling to forget her past, Allie runs into Damien, a local rebel with secrets of his own. He's dark, dangerous and he keeps showing up when Allie least expects him to. She has every reason not to trust him. So why does she find herself opening up to him in a way she hasn't been able to with anyone?

As pieces of Damien’s identity emerge, answers to a rumored mystery begin to unfold. By the time Allie unearths the secrets of Damien’s past, she realizes just how intricately they are connected. Now she is caught in a dangerous battle that threatens her life and those she loves.


My Review:
I received a copy of Lingering Echoes for an honest review.

Wow, I did not expect what happened in the pages of Lingering Echoes to happen at all. The synopsis really did an excellent job of not giving anything away.

Allie Collins used to go to a cabin with her family ever year. Then one year while watching her cousin an accident happened and her cousin Maddie ended up dying. Still not over everything that happened and not wanted to get back in the water the cabin is the last place she wants to be. Her father has a new family and Allie doesn’t want any part of it. While on vacation she makes friend and meets a mysterious stranger who seems to always be looking out for her but is shrouded by secrets from his past. When Allie finally uncovers Damien’s secrets she gets dragged into his world and she may not survive this summer at the lake.

Allie is very withdrawn from everyone for a lot of the book. She doesn’t really want to participate with her friends or her family because she doesn’t want to be at the cabin. There is a lot of back and forth with her step brother Nick who seems to hate her a lot. They constantly argue and that causes a lot of trouble for both of them but in the end does help them both understand each other better. Like I said Allie is really withdrawn and depressed and it does get a tad old after a while because as the reader I could see she has a pretty good life even with the bad parts and she was taking all of it for granted.

Damien is sweet and protective but also secretive about his own life. When he opens up I find him to be even more likeable. Damien always looks out for Allie and even gets her to face her fears about water and helps her deal with her guilt about her cousin. He even gets into a fight to help save both her and her friend Brooke. He definitely shows he is not someone to mess with.

Aaron is sweet and really cares about Allie, but is kind of friend zoned throughout this book although there are hints that a romance brews under the surface. Aaron is Nick’s best friend and always tries to keep the peace between the two of them.

Lingering Echoes has hints of a love triangle, but honestly from the beginning I was pretty sure who Allie wanted. Damien and Allie make an adorable couple but I think even if she had ended up with Aaron she would have been happy.

I’m not entirely sure why I didn’t fall in love with this book but something fell flat to me. I think it was the fact that Allie would just freak out sometimes on one guy, run to another guy and then somehow ended up with the guy she freaked out on. Allie just wasn’t my favorite character and while I get where she’s coming from it became a bit annoying after a while.

Overall, I really enjoyed Lingering Echoes with the fast pacing, the surprises, and good writing. I would definitely read more from Erica Kiefer and I would love it if there were a sequel to Lingering Echoes. The suspense is killer, the action scenes are awesome and the ending will definitely leave you wanting more of both the series and the writer.

Teaser:
“Hey! Put me down!”
With a full smile, he exposed his white teeth lined up next to each other, as his dimples teased me again. “With the pace you’re making, you’ll never make it back before sunrise.”
Resisting the idea of being carried, I tried another tactic. “You’re not supposed to move someone who’s fallen, you know. Everybody knows that. I could have a broken back or a broken neck-“
He cut me off. “Well, there’s obviously nothing wrong with your mouth.”


Swoon:
My laughter subsided as I looked up at him. He was watching me with such adoration in his expression that my heart skipped a beat. My stomach twisted inside itself all over again.
Here I was with my hero, at last.

Thank you, Clean Teen Publishing and Netgalley for providing me with a copy of Lingering Echoes.

Erica Kiefer was born on Christmas Eve in Southern California to an American father whose ancestors arrived from Europe during colonial times and a Thai mother who moved to the US during high school. Adding to her rich and varied heritage, Erica grew up living abroad in Asia, including Taiwan, Fiji, Thailand and Indonesia. She gained a great respect for the beautiful mosaic of cultures found in various parts of the world. After graduating from International School Bangkok, she attended Brigham Young University in Utah, where she earned a degree in Recreation Therapy. Her career as a Recreation Therapist has allowed her to work with at-risk youth since 2007.
Erica made the best decision of her life by marrying her husband in 2005 and is currently a mother of three, one of whom awaits her in heaven. Erica also loves singing, reading, writing, and satisfying her sweet-tooth with chocolate-chip cookies. Playing collegiate rugby was one of the most memorable experiences of her life, thus far.
Erica’s first book is titled Lingering Echoes, which was published by Clean Teen Publishing in November, 2013. Her newest release titled Rumors, was released in late December 2013 and is a prequel novella to Lingering Echoes.