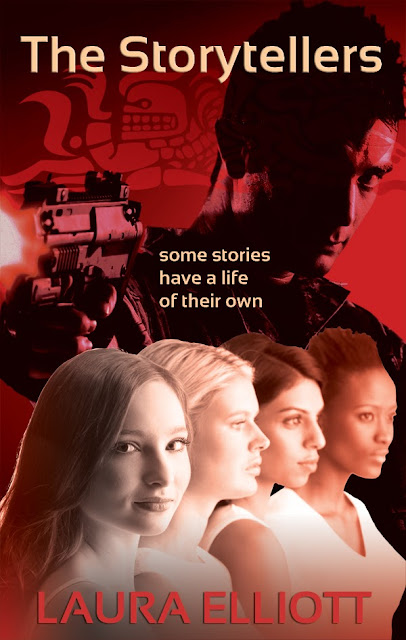 Four women who call themselves The Storytellers have gathered one hot August evening to tell tales, as they have for years. But on this night, they unknowingly evoke the powers of an ancient Mayan idol that breathes real life into their stories. The Mayan idol isn’t the only ancient being awakened. A powerhungry demon is determined to see the women fail and become enslaved to him forever.Now the women’s lives depend on surviving each other’s stories, defeating the demon and solving a centuries-old mystery.If they survive until The End untold wealth is theirs. But some stories have a life of their own…

So excited to share the dream cast for THE STORYTELLERS with you today. In THE STORYTELLERS, four women writers' stories all come true for each other when they fall under the spell of an ancient Mayan idol. Their lives and loves depend on surviving each other's stories, defeating an ancient demon and solving a centuries old mystery. Here is the dream cast for the four storytellers:
DR. ALEXANDRA ABERNATHY

Here are some of characters that populate their real & fictional worlds:

About the Author:
I love writing about enchanted road trips, cursed storytellers, shadow worlds, and alien romance while eating lots of popcorn. After twenty-plus years as a freelance graphic designer/animator with clients including E! Entertainment Television and The Los Angeles Times, I left the real world behind and followed my heart into the world of fiction. Little known fun facts––I can’t kill a spider but would gladly kill the tomato-plant eating gophers in my yard if I could get my hands on them, I wouldn’t mind dying in a vat of salted carmel ice cream from Portland’s Salt & Straw, next on my dream list is a trip to Indonesia, I daydream of doing stand-up comedy when I’m not completely terrified of it.