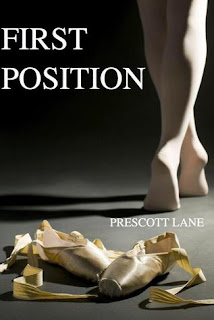 
Book Description:
Emory faces life’s challenges at the one place that’s never failed her, the ballet barre. But even the barre can’t steady her when fate brings her face-to-face with her old college flame, Mason, who’s hoping to return to the NFL after a career-threatening injury. Before they can surrender to their sexual desires and find salvation in each other’s arms, they need to come to terms with their past. Mason must confront the demons that have set him on a path of self-destruction, while Emory must decide whether to keep her painful secrets locked away, or expose them and risk losing the love of her life. But nothing can prepare Mason for what Emory has kept hidden, or the possibility that he himself may be to blame for the very secrets she keeps – and why they continue to haunt her.


My Review:
I received a copy of First Position for an honest review.

Emory Claire’s fiancé Eric has finally had it with Emory putting off their wedding plans and finally has them on the right track to picking everything out but when push came to shove Emory couldn’t do it, she couldn’t marry a man she didn’t love.

On the way home from her break up with Eric Emory walks into (literally) her ex college boyfriend. The one that years ago left her broken and unable to be with anyone else the one she was never able to get over, Mason.

Mason couldn’t be happier to run into Emory since his life has taken a turn for the worst. Ever since he walked out on Emory all those years ago there hasn’t been a day that’s gone by that he hadn’t regretted his decision. Now Mason wants to start a new life on a new NFL football team close to Emory. Even with divorce, his bad shoulder, and his mother looming over the relationship like a dark cloud Mason has hope that if Emory will take him back after everything he’d done his life will be worth it.

However, both Emory and Mason have  demons in their pasts they had to face in order to be together, and while even when things seem to be going great Emory has the darkest secret of them all that almost causes the end in their relationship.

I honestly don’t know what to say about First Position. I liked it but I also didn’t. I liked the story overall I think Emory’s and Masons love story was perfect with just the right amounts of harsh reality thrown in there to make it seem like a real relationship. I also liked the fact that the epilogue shared what happened after the final chapter. I loved Emory, Olivia, and Wesley the most, their characters were so amazing and completely made the story.

I didn’t like Mason all that much, I don’t know what other than I just found him extremely annoying and selfish and jealous. The list can go on about why I had problems with him. I didn’t enjoy all of the character pov changes. While I love when there are multiple pov’s in a story I felt this was done poorly because EVERYONE got their pov told without warning and it was kind of aggravating to try and figure out whose story was being told.

Overall, I found First Position was a greatly written debut novel by first time author Prescott Lane that many people will enjoy. While I did have some major problems with the story I didn’t find it unbearable. I think many people will be able to relate to First Position’s story and characters and I hope some of you reading this will check it out. 8)