The Spirit Keepers by J.S. Winn 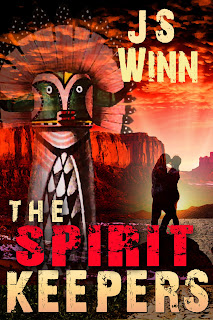 Synopsis:
Can you escape the wrath of the Spirits?

One of Sandy Jacobs’ ten year old students and his family are accused of witchcraft. Blamed for the mysterious deaths of two San Anselmo Pueblo children, they’re terrorized by “Boogeymen” Kachina, fierce-looking impersonators of the spirits. Sandy rushes to their aid, but her actions inflame the perpetrators and arouse the opposition of Native born faculty member, Ben Rush. Sandy and Ben clash over the issue while struggling against the attraction growing between them until the harassment culminates in violence. Together they risk their lives to uncover the truth and, in the process, learn lessons as valuable as any they have taught.

For all those fascinated by the American Southwest, Native American culture, and Tony Hillerman mysteries.

Review:
Received a copy for an honest review.
Sandy Jacobs has moved to New Mexico to get away from her past life in Philadelphia. Desperate for a change and trying to get over the loss of her son she jumps at the chance to teach in the small town of San Anselmo. Too bad Sandy's problems seem to have gotten worse when she gets there.

Upon arriving she watching innocent sheep get gunned down. When she waves someone over to discover Ben Rush a Native American hottie with a flirtation smile. After telling her everything is taken care of she feels at ease. Trying to set up for school and her apartment she sees Ben again and realizes he works at the school with her. Almost instantly a connection is formed.

One day Dixon one of Sandy's students comes to her with a bullying problem Sandy is quick to help the child and his family, but the problem may be too big for Sandy to handle on her own. There are children dying and the family being blamed is none other than Dixon and his family. Now Dixon's family is being shunned, accused of witchcraft, and is often visited by the Kachina or boogeymen.

While Sandy goes to all the tribal and anyone who can help she is continuously turned down, everyone claiming the family must deal with it themselves. When other events and threats begin to take on a dark edge the only person still trying to help Dixon's family is Sandy.

When Dixon's family's house gets set ablaze with Dixon trapped inside Ben rushes in to save in. When Dixon winds up in a coma after the incident Sandy goes back to look for clues, only to come face to face with the perpetrators.

I have to say I wasn't sure what to expect with this book. I truly enjoyed this book. The Spirit Keeper kept me on the edge of my seat wondering who the bad guy was until the very end. I couldn't believe who the bad guy was at the end. I loved the ending and was extremely happy with the ending. I am definitely pleased that I got to read a copy of this amazing book by J.S. Winn who is an amazing author. I hope that everyone is able to pick up a copy of this book!! 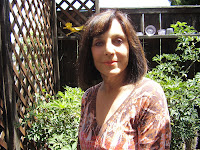 About the Author
J. S. Winn earned graduate degrees from the University of Pennsylvania and the University of Metaphysical Sciences. Her previous mystery/suspense novel, Out of the Shadow, was published on Amazon in 2012 (http://amazon.com/dp/B008dPYM59C). She has had a play produced by the Actor’s Alliance Festival in San Diego, and her poetry has been anthologized by the San Diego Writer’s Workshop in For the Love of Writing. Her play “Gotcha!” was selected for a reading at the Village Arts Theater in Carlsbad, California in May 2012.
She presently lives by the beach in San Diego County, California.
For more information, please visit http://www.jswinn.com or contact the author at author@jswinn.com
Posted by Reese's Reviews at 1:00 AM