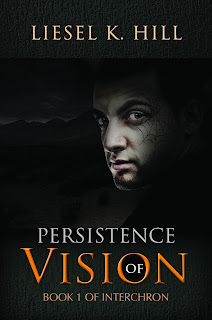 Book Info:
Publisher: Tate Publishing, Inc.
Publication Date: January 29, 2013
Page Count: 384
Genre: New Adult, Science Fiction, Dystopian, Romance, Time Travel
Facebook: facebook.com/interchronseries
Twitter: twitter.com/lkhillbooks
Pinterest: pinterest.com/lkhillbooks
Goodreads Author Page: goodreads.com/lieselkhill
Goodreads Book Page: http://www.goodreads.com/book/show/15982000-persistence-of-vision
Blurb: In a world where collective hives are enslaving the population and individuals have been hunted to the verge of extinction, Maggie Harper, and independent 21st Century woman, must find the strength to preserve the freedom of the future, but without the aid of her memories.
After experiencing a traumatic time loss, Maggie is plagued by a barrage of images she can't explain. When she's attacked by a creep with a spider's web tattoo, she is saved by Marcus, a man she's never met, but somehow remembers. He tells her that both he and her creepy attacker are from a future in which individuals are being murdered by collectives, and Marcus is part of the rebellion. The collectives have acquired time travel and they plan to enslave the human race throughout all of history. The flashes Maggie has been seeing are echoes of lost memories, and the information buried deep within them is instrumental in defeating the collective hives. In order to preserve the individuality of mankind, Maggie must try to re-discover stolen memories, re-kindle friendships she has no recollection of, and wade through her feelings for the mysterious Marcus, all while dodging the tattooed assassins the collectives keep sending her way. If Maggie can't fill the holes in her memory and find the answers to stop the collectives, the world both in her time and in all ages past and future will be doomed to enslavement in the grey, mediocre collectives. As the danger swirls around her and the collectives close in, Maggie realizes she must make a choice: stand out or fade away...
My Review:
I received a copy of this book for an honest review!
Holy toast and bread! This book is honestly one of the most mind blowing and complex books I have ever ever read. Liesel Hill has taken writing and world building to a whole new level. Before I start my review I would like to say thank you to Liesel for following my blog and asking me to be apart of her blog tour.

Maggie Harper's is in Las Vegas with her brother having a drink when suddenly she sees a flash of images and then almost 12 hours later Maggie and her brother find themselves wake them up in a hotel room with no memory of how she got there.

Exactly a year later she finally thinks his life is back to normal although feeling as if something crucial is missing from her life when she's attacked by a man with a strange tattoo who seems to recognize her. Next thing she knows the man she had seen right before she was taken in Las Vegas shows up at her door and saves her. Now she's running for he life up the mountain with this strange man into, the future.

Maggie then finds out she's been in this strange world before. She knew these people and became a crucial part of this rebel team who is fighting against the collectives. Struggling with relearning all this information and fighting to remember everything she has forgotten, including Marcus the man who she feels safe around. She learns that she has powers and she is the tool to bring down the collectives once and for all. When more and more pieces come together she begins to find out that her situation and memory loss are far more complicated than anything she or the others could have imagined.

Maggie's world is complex and amazing. There are people with amazing powers and the world while both amazing is also deadly and unsafe. The world is so intricate and vast it's amazing. A lot of the terminology had to do brain's and science and it was all over the place with awesomeness. Since I'm a psych major I found the way Liesel described and made her world so amazing and wonderful. To think if brains could do what she said was so amazing.

Overall, this book was awesome. It was a tad slow for me to start with taking in the new world and trying to understand and put to use the terminology. However, once Maggie's story was in full swing I could not put this book down for a moment. I hope you all pick up a copy ASAP, because this book is amazing and i am so dying right now for the second book because that ending was just, WOW!

About the Author:
Writes across three genres: scif/fantasy, historical fiction, and crime drama. Graduate of Weber State University and lover of all things fantastical! :D
Posted by Reese's Reviews at 5:03 AM