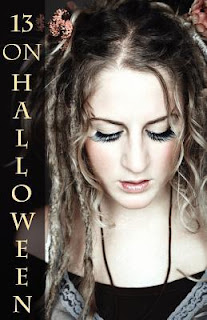 13 on Halloween (Shadow Series #1) :
Roxie has the best night of her life until the popular kids decide they want to celebrate her birthday in a way Roxie never expects––in her attic, with a gift that’s out of this world, and a pact to never tell a living soul what happens next.

Twelve-year-old Roxie wants to be like Adrianne, the popular girl who gets everything she wants––a flock to prowl around the mall with; invitations to parties; and for Hayden, the cutest guy in the eighth grade to, you know, notice her. When Roxie invites all the eighth grade peacocks (code word : popular kids) to her first ever thirteenth birthday party on Halloween, they all come and give her a gift that’s literally out of this world. Roxie astral projects to Planet Popular where she becomes seventeen instantly and gets everything she’s always wanted, but nothing is as it seems. Being a high school peacock is complicated and Roxie will risk everything to be who she thinks she wants to be. Oh yeah, there’s Prom, doppelgangers, a mysterious map, and lots of bad peacocks too.
13 on Halloween, (Shadow Series #1) is now available as an audiobook on iTunes, Audible or Amazon. (My Review) 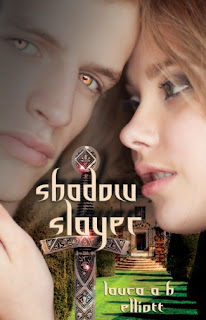 Shadow Slayer (Shadow Series #2) :
Shadows will do anything to become human. You see their influence everyday. You say things you don’t mean or do things that aren’t like you. You look, different. Friends you’ve known forever suddenly never call.

As a freshman, Roxie just wants to fit in which is impossible because she barely runs into her friends at her huge high school. Adrianne’s disappearance and Hayden’s attention rock Roxie’s world. But nothing rocks it like the most gorgeous guy at school, Drew. And nothing is more important to Roxie than astral projecting back to Planet Popular to solve the mystery of the map. But that changes when Drew invites Roxie to Homecoming. Hayden warns her that something’s wrong. Why would a guy like Drew like Roxie anyway? Drew must want something. Hayden’s right. Drew is...different. Planet Popular was just the beginning. Part of a bigger world, the Shadow World. There’s a war brewing between the world of humans and the world of shadows. When the shadow invasion begins at Roxie’s high school, she’ll not only fight for her life but the lives of her family and friends, when she discovers she’s the Shadow Slayer, the one human who can save Earth from the shadow onslaught. But, Roxie can’t even kill a spider. Oh yeah, there’s an evil English teacher, an enchanted play, a sword of Sandonian steel, a homecoming of horrors, and seven magic words too.


My Review:
In the beginning pages of Shadow Slayer Roxie and her best friend are Ally are getting on the bus for their first day of high school. They are both extremely nervous and have no idea what to expect from the place they've dreamed about being in since they were little. While waiting on the bus they meet a new girl named Wanda. At school while Roxie sulks about having no classes with any of her friends Wanda invites her to try out for the school play. At first Roxie doesn't want anything to do with Wanda or the play but she soon changes her mind when the teacher forces her.

Being in high school isn't at great as Roxie thought it would be. All of Roxie's friends seem to either have found new friends or is avoiding her like the plague. Then one day Roxie sees a 10! A ten on the hot factor of guys, a perfect and she's instantly caught in the beauty of his golden eyes. Lucky enough she gets cast as the girl who falls for him in the school play with the hottie playing the main role. Drew the ten seems just as drawn to Roxie as she is for him, but soon everything is going to become dangerous not only for Roxie's friends and family, but the world. For Planet Popular was only the beginning, and now the shadows want what they always have, a human life. Soon it'll be up to Roxie to decide the worlds fate when she finds she is the new Shadow Slayer.

Overall, this book I feel is still for the younger crowd. There wasn't as much Roxie speak as there was in 13 on Halloween. Shadow Slayer is full of many twists and turns that will leave you guessing the worlds fate until the very end.

Excerpt:
I catch Hayden staring at me and he looks away. He just takes off for the front door. I follow.
“Why did you do all this?”
He stares into my eyes and just as he opens his mouth to say something, his eyes go wide. “Don’t trust Drew, Roxie. He’s a shadow.”
“A what?” I say not believing Hayden would say such a thing. “Very funny. How would you know anyway? I’m getting pretty sick of the way you think you’re some expert about the shadow world.” I lower my voice. “Drew isn’t a shadow. He’s as human as they come.”
He raises his eyebrows and walks closer to me so that there isn’t more than two inches between us. I look into his blue eyes and his permanently sun-sparkled hair and see us there at The Enchanted Island homecoming dance on Planet Popular all over again. I feel his arms around me. And for a second, I think he might kiss me, but instead he walks out the front door. I peer out the dining room window and watch him bike down the driveway. He doesn’t look back.
“So what part did you get in the play?” Brian says.
“I’m a sprite named Ariel,” I say. “She bewitches Prospero.”
“I heard your boyfriend got the lead,” Brian says, elbowing me in the side.
“He’s not my boyfriend.”
“Oh, yeah, he looked like it at Farrell’s today.”
I freeze. Brian saw Drew and me, together.
He grins.
“What’s this about a boyfriend?” Mom says. “You know you aren’t allowed to date until you’re sixteen. Dad won’t allow it.”
Boy, do I know. I got the major lecture the night before school started. And I swore I wouldn’t date anybody. Right to Dad’s face. Gulp.
“Um, what does Ariel do to him to bewitch him?” Ally says, interested in my part in the play for the very first time.
“It’s more like Ariel falls under Prospero’s spell,” I say, trying to shrug off what Hayden said about Drew being a shadow.

Laura A. H. Elliott BIO:
I love writing about enchanted road trips, shadow worlds, and alien romance while eating lots of popcorn. I live with my hubby and Oso, our aussie shepherd, in our tree house on the central California coast. After twenty-plus years as a freelance graphic designer/animator with clients including E! Entertainment Television and The Los Angeles Times, I crossed over into the world of publishing non-fiction and followed my heart to the world of fiction. Check out my other books at Laurasmagicday.wordpress.com or find me on Facebook or @Laurawriting!

Amazon link for FREE copy of 13 on Halloween (Shadow Series #1): http://
www.amazon.com/Shadow-Slayer-The-Series-ebook/dp/B009CJ5DXE
Posted by Reese's Reviews at 1:00 AM